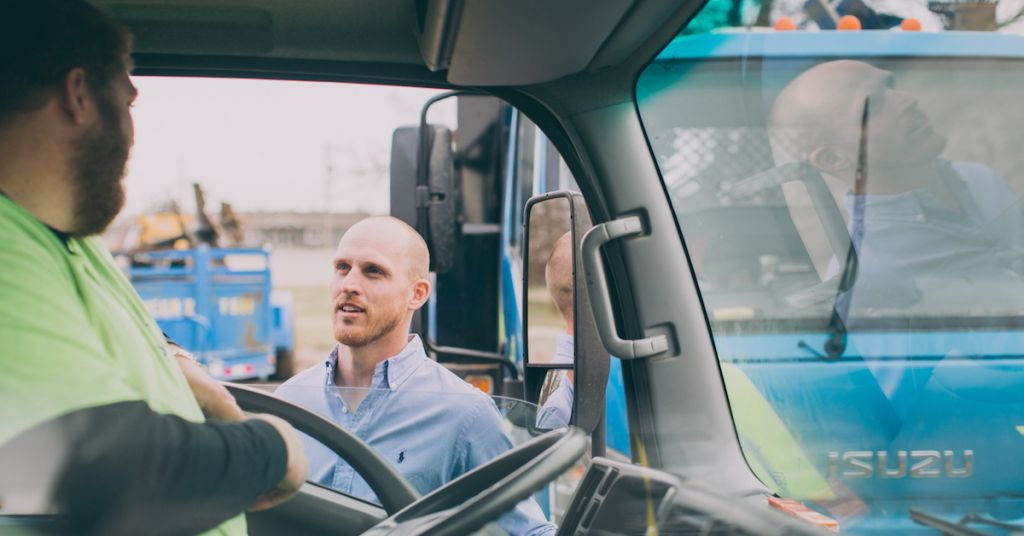 When you’re thirteen years old, there are a lot of things that go through your head when you enter the rodeo ring for the first time. In this case, the goal was relatively simple. Bull riding would happen later, the chuckwagons weren’t yet ready to race, and the whips were still waiting to be cracked. The big events would come later, but in a sense, the stakes in this event were much higher.

Of course physical injury is always a possibility in the rodeo ring, but breaks and scrapes always heel. For a 13 year-old in the ring, there are other outcomes that are far more profound, at least one of which can take a lifetime to overcome.

“The biggest thing I was worried about was disappointing my dad,” said Kyle Swenson.

The event was at AKSARBEN (Nebraska spelled backwards) and it was a funnel of sorts. In the months leading up to the event, 4H clubs across Iowa and Nebraska had put forth some of their most ambitious young people. The group had been whittled down to 120 kids who then descended on Omaha in their Wranglers and cowboy boots with nothing more than a rope and a dream.

During the competition, the children were thrust into the arena in groups of ten. A few of them looked nervously to their parents, who responded primarily with that subtle nod that farmers often have. A nod which mysteriously conveys encouragement and a level of confidence that comes only after spending decades working the land to feed a family while overcoming droughts and floods.

As the parents looked on, a group of wild calves were released at the other end of the ring, exploding into a mass of energy that is reserved for only a few of nature’s creatures. The children froze in position, studying the calves and searching for any patterns to their movements. Then the announcer called out over the loudspeaker, uttering a few simple words that miraculously brought the group frozen miniature cowboys to life.

The purpose of the contest was to catch a wild calf. As the calves bucked and bit and screeched and ran, the children chased them around the ring as the audience cheered and the air filled with rodeo dust.

Anything But A Novice

By the time he was 13, Kyle was anything but a novice. He had already been showing and raising pure bread Gelbviehs for at least four years, with a little help from his older brother and sister. With about 100 head on the farm at any one time, the three kids would spend the winter breaking the calves and trying to find a few that might be good enough to show.

Breaking calves and raising cattle is hard work. As a nine year-old, Kyle would get up at 5 AM to start his chores. He would grind seed into feed before carrying a seemingly endless supply of 5-gallon buckets to the calves and cattle in the pasture.

“For years, most of those buckets weighed as much as I did,” Kyle says with a laugh. “And even though this was work, I enjoyed nothing more than spending this time with my father. It didn’t seem like work to me and I really felt like I was accomplishing goals that would later pay-off. I also think I grew up a lot faster because of my older brother and sister. I really looked up to them, and wanted to keep up and do what they were doing.”

During the summer, the work wasn’t too bad. But most of the heard dropped their calves in February and March, which meant early mornings in the dark with temperatures that were cold enough to make lasting memories.

“My dad would let me drive his five-speed ford truck as he ran the spot light over the heard, looking for new born calves,” Kyle remembered. “It was like Christmas morning every time, with so much excitement over the fact that we might have another newborn in the heard each night.”

The three siblings would start working with the animals from the time they were born. This meant more feedings in the middle of the night, and lots of time spent breaking, walking, and training. Those that could be trained would be watched a little more carefully, with the hope that the best might be ready for the bucket calve shows in the spring. If they showed well in the spring, they would be carried on to the fall to be shown as well. The best of those would then winter over with the hope of making it to the Iowa State Fair the following summer.

It was a long process for a nine year-old that demanded dedication and commitment to overcoming obstacles in circumstances that most children are never challenged to face. What’s more, the show cattle were just the family’s hobby. The real work was maintaining the rest of the heard while also farming around 1,000 acres. Of course, the kids also managed school and the usual sports, while their dad spent the work day in a full-time position with the county and farming during the nights and weekends.

Kyle’s mother juggled the family and supported the farm, while also taking classes to get her Masters Degree in Education.

“My mother put everything aside for our family, she waited to pursue her passion and dream so that our family could do the things we wanted and she would always be involved in our activities. I learn early on that family is number one and its never too late to pursue your dreams.”

Perhaps it’s a schedule that is sensible only to an Iowa family. But it was long ago established that Iowa farm families have a knack for doing the work that would take most ordinary people two or three lives to accomplish.

So when Kyle entered the ring at AKSARBEN, he was just a kid, but at the same time he was a kid that knew what was really possible with focus. His parents were watching from the stands, and when Kyle looked up to his father, he received that encouraging nod and then raced off in pursuit of his calf.

Of course, the calf never stood a chance. Kyle had it caught, correctly haltered, and led back to the other end before it blinked.

For those that caught a calf, the contest was really just beginning. For the next year, Kyle raised the calf into a steer, tracking it’s progress and earning points as part of the contest. He returned the following spring with his steer, and learned that he had earned enough points through the winter that his steer would be auctioned.

The auction house is sort of an academy awards event for 4H kids. It’s the place where hard work is monetized and dreams are made tangible and real.

Kyle’s steer was perfect and a popular among the bidders. As the price climbed into the thousands, Kyle’s eyes began to grow. As it climbed into the ten-thousands, his heart raced. When the final bid was called, Kyle was sure he was dreaming. When the figure was repeated a second time, the crowd erupted in cheers and applause, as Kyle was greeted with enthusiastic handshakes and back-slaps. He had done it. The Omaha World Herald had entered a final bid of thirty-five thousand dollars for the steer.

With the sale, Kyle earned the cap on the commission, a figure of about $800. When Kyle looks back at the day, the commission felt more like a million. About a week later, Kyle put it toward his first truck – a 1984 Chevy Scottsdale pickup.

Over the years that followed, Kyle continued to play the long game. He graduated from Iowa State University with a degree in horticulture and pursued a career in the green industry. As other friends were taking jobs in management and business, Kyle chose a different route and accepted an hourly position on an irrigation crew with Perficut.

“I had a lot of older friends that got out of college and immediately took management jobs or started their own businesses. Many of theme weren’t successful because they didn’t learn the hands-on things that you have to know to perform a job. I wanted to begin at the starting line and learn the trades from the beginning,” said Kyle.

“We’re in the business of growing things,” said Kory Ballard, one of the co-owners of Perficut. “That includes grass, plants, trees, and shrubs. It also includes our business and industry. But most importantly, it includes growing people.”

“Often you can tell how something is going to grow by looking at it’s roots,” Kory continued. “When we met Kyle, we knew that he had strong roots and we believed that he could become part of the team that would help our business grow to the next level.”

“If he wanted to work irrigation, we would let him,” Kory laughed.

At the time Kyle had met the girl of his dreams and was looking forward to starting a family and buying a house in Des Moines.

“It was a little scary to take a job at $10 an hour, but I believed in what I was doing and I like everything that I was learning about the company,” Kyle said. “My dad always told me, ‘work hard, treat people with respect, and good things will happen.’ So that’s what I did.”

Within a couple of years Kyle was promoted to Production Manager for the mowing department, overseeing the maintenance of thousands of acres of commercial property in central Iowa. Two years after that, he took over commercial maintenance and snow. Then last fall, he replaced Kory Ballard as General Manager of Production, overseeing all of Perficut’s production activities.

“The extreme growth at the company over the last five years has been a lot of fun,” Kyle said. “We’re constantly changing and innovating. Many of my friends from college have told me horror stories about their experiences at companies that are going through change. It’s totally different here. Everyone comes together to do their part and we’re all moving together in the same direction. It’s an incredible team.”