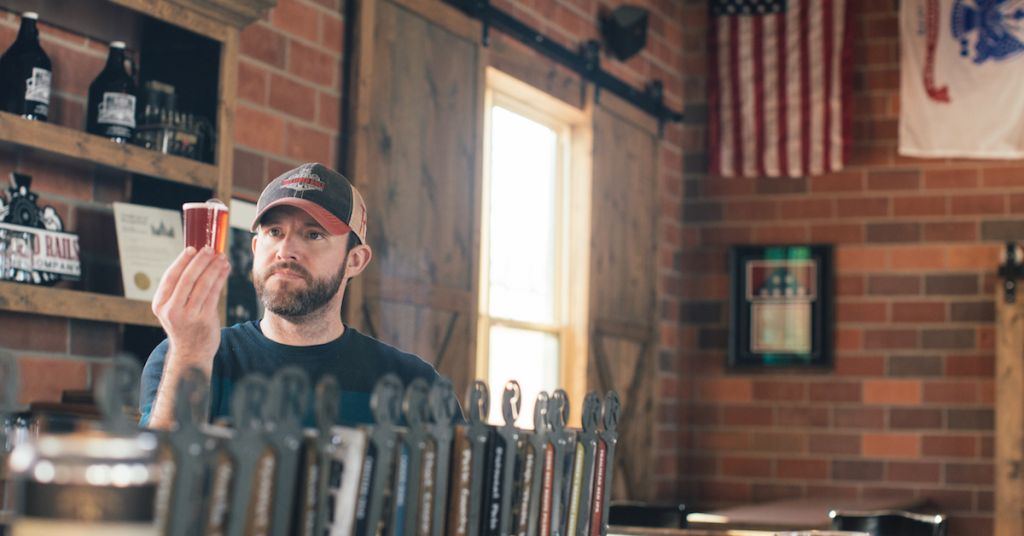 It’s a jump that would leave most people breathless, but as the old line goes, “Entrepreneurs are born, not raised.” So when the thought occurred to them over a pint on a Friday afternoon, their immediate response was, “Why not?”

Jeremy is a guy that naturally wears a lot of hats. During the day, he’s the head of sales for Perficut Companies, managing a team that is responsible for annual revenues of eight figures. For the last four years, he has spent his evenings as a member of the City Council in Altoona while balancing board memberships that are too numerous to list.

With so many responsibilities and such a long list of important items on his daily list of duties, Jeremy is a guy that lives very comfortably in the present. So it was a bit of a surprise when an experience from Jeremy’s past appeared in a free moment in his present in a way that would dramatically shape his future.

“Twenty years ago I was on vacation in Colorado. A friend had told me about a new brewery that had opened and encouraged me to go check it out,” Jeremy recalled. “During the tour, they told us how the brewing system worked, how they selected their hops, and their philosophies on brewing. At the end of the event, the owners climbed up on top of milk crates and gave a speech about how they were going to take over the world.”

“I was fascinated by the entire process of brewing, but what I really loved was their passion.” Said Jeremy. “It was incredibly contagious. Here was a group of friends that came together and were pouring their heart and souls into something that they really loved. I knew that I wanted to live my life in the same way.”

Over the decades that followed, Jeremy pursued his passions in numerous ways, but the idea of a brewery lingered.

An After Work Pint

“One day I was having a pint after work with Jeremy and Chandler (Parsons),” recalled, JC Obrecht, a friend and co-worker of the pair. “Chandler was commenting on the beers that we were drinking and the three of us started talking about what we might do differently. As we continued to talk, the conversation moved pretty quickly from ‘what’ to ‘how.’”

“Chandler had a lot of experience with brewing. Jeremy had a lot of experience working with businesses and communities. I was the devil’s advocate and had to ask all the tough questions,” said JC. “But the more tough questions I asked, the more easy answers they had. After a few months of discussing it, I became convinced that we had to move forward and open a brewery.”

During their day jobs with Perficut, the three friends had worked together on numerous projects including Cowles Commons, The World Food Prize Hall of Laureates, Operation Downtown, and the maintenance of sites including Principal Financial and Nationwide.

“I told the guys, we’ve conquered bigger things together than this. We can do it.” Said JC.

Shortly thereafter, Jeremy caught wind that a local Ankeny brewery was closing and a seven-barrel brewing system was available for sale. The three friends bought it. Shortly after that, they learned that another brewery in Des Moines was closing and there was a larger 15-barrel system for sale. They bought that one too. Suddenly they found themselves with a system that could brew 500-gallon batches of beer, with 2,500 gallons in process, and another 5,000 gallons of storage.

With equipment in hand, they just needed a brewery.

“When we sat down to start designing the brewery, we knew immediately that we wanted to create a space that was historical and environmental,” JC said. “We all work full-time in the green industry and spend our days providing environmental solutions to our clients for the landscapes and maintenance programs. So we made a goal to use as many recycled and up-cycled materials as we could in the design and construction of the brewery.”

The deck outside the bar was built out of beams that were reclaimed from the notorious “Log Ride” that was recently decommissioned at Adventureland. The tin ceiling over the deck came from a family barn in Pocahontas. The bar was built from materials recovered from a 117 year-old train station that was demolished in Altoona. The top of the bar was removed from a semi trailer that was found in Branson and then inlayed with .40 caliber hand gun shells to fill the old screw holes from the trailer. The footrest is a train rail and the coffee tables are luggage carts from an abandoned railway car.

“Even the name of the brewery, Reclaimed Rails, is a reference to the “Rails to Trails” program and the bike trail that runs past the brewery,” said Jeremy.

The final step in development was to find a brewer that would be creative but also responsive to the tastes of the clientele. Justin Cloke, the Head Brewer at Court Avenue Brewing Company in Des Moines expressed an interest in the position, and the team immediately hit it off.

“Reclaimed Rails is truly a community brewery that’s focused on making great beers for great people,” said Justin. “We provide opportunities to home brewers to come in and brew beer on a larger scale and opportunities for charities to host fundraisers. It’s a great place for a special occasion or a place to gather with friends on a regular basis. Whatever our community needs, we want to be able to provide it.”

With 14 original beers on tap and a family-friendly rootbeer, Reclaimed Rails is ready for anyone.