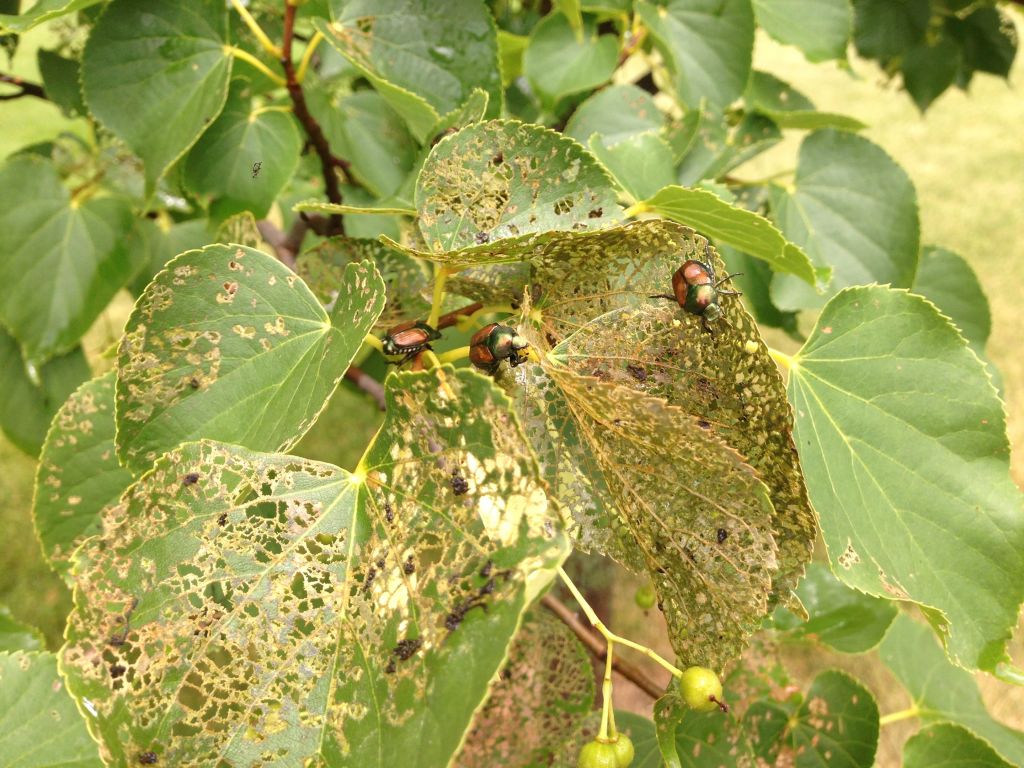 July first marks the beginning of the emergence of the Japanese Beetle in our region. This service alert is designed to give you more information about this pest and a few tips on how to mitigate the damage.

The Japanese beetle is a serious pest of turf, trees and ornamental plants, and a difficult species to attack due to the complex nature of its lifecycle.

The Japanese beetle begins its destruction as a grub or larvae living 2-3 inches below the soil. Grubs feed on grass roots, reducing the ability of the grass plant to take up enough water and nutrients to withstand the stress of hot, dry weather. As a result, large dead patches of grass develop, which can be rolled back like a carpet to expose the destruction. Grub infestation may also be indicated where crows, moles, and skunks are found to be digging up the soil while feeding on grubs.

In early July, the grubs grow into adult Japanese beetles and begin to emerge from the soil to feed, mate and lay eggs. By the Fourth of July, adult beetles will begin to feed on trees, vines and other ornamental plants. This activity typically continues for 6-8 weeks, during which more than 60 eggs will be laid.

Japanese beetles feed in full sun at the top of plants, moving downward as the leaves are consumed. At dusk, the females fly to the turf to lay eggs, burrowing about 2-3 inches below the soil. Grubs hatch a few weeks later, growing quickly and eventually growing to about an inch by late September. Most beetles pass the winter about 2-6 inches below the surface, and then begin feeding in April or May when ground temperatures begin to rise.

Around the Fourth of July, Japanese Beetles will begin emerging from the ground and feeding on the leaves of Linden, Birch, Maples and Crabapple trees, as well as rose bushes and other ornamental plants. The beetles will be found feeding between leaf veins, making the foliage look similar to lace. The insects prefer to feed on the outer portions of the foliage where the sun is strongest.

Treating Japanese beetles can be complex due to the nature of the pest’s life cycle and the distances travelled by adult beetles. An effective treatment program may require the application of insecticide to both the trees and turf.

Turf applications can be applied in the spring when the recently overwintered grubs start feeding. However, these grubs can be difficult to kill due to their large size and ground applications are generally more effective when applied in early fall.

If damage is found to trees and ornamental plants, treating adult Japanese beetles is recommended in July and August. The presence of beetles on a plant attracts more beetles. Therefore, by not allowing beetles to accumulate, the plants and trees will be less attractive to other beetles – benefitting the trees and ultimately the turf. In circumstances with advanced infestation, multiple treatments may be required.

Any tree treatment for Japanese beetles should be combined with a fall grub control program so that the life cycle does not repeat itself the following year.