The Color of Success is Black and Gold 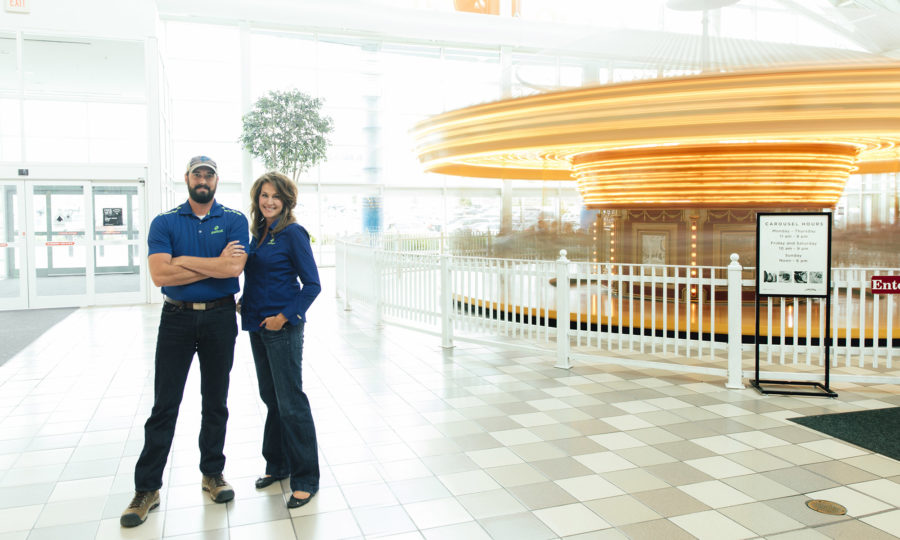 “No company car. No marketing tools. All I had was a t-shirt and my white Pontiac.”

It’s certainly not the latest saga from Seal Team Six, but it’s really not a bad story either. Maybe she’s more like Churchill. If Churchill were a thirty-year-old woman with skinny jeans and a Bonneville.

Where It All Started

It all begins in 2009 in Eastern Iowa. The waters from the “500-year flood” had finally receded, the economy was showing an inkling of improvement, and like twin lotus flowers rising up out of the mud in the Indian summer, Cedar Rapids and Iowa City were finally coming back to life. Matt Boelman and Kory Ballard were hanging around their offices at Perficut Companies in Des Moines, and they were hungry.

Nearly 20 years earlier, Kory had founded Perficut with a moped, a mower and a piece of rope. Too young for a driver’s license, it would be another two years before he could legally drive a truck. Matt joined the company shortly thereafter, supercharging the company as the pair set their sights on the future.

Over the decades that followed, Perficut clawed its way up into the various lists of biggest and best companies working in what insiders call “the green industry.” Perficut was the first company in Iowa to make it into the Landscape Maintenance “LM150,” which features the top providers in North America. It was the first Iowa company to be featured in Lawn & Landscape’s “Top100.” After opening a snow maintenance department in 2005, the company became the first in Iowa to be recognized as part of Snow Magazine’s “Snow100.”

“We had been so focused on central Iowa for so many years,” said Kory. “Then one day Matt came in and said, ‘What do you think about going east?’”

But how do you build something out of nothing?

“You hire Tiffany Vaske,” Matt says with a laugh.

Tiffany had a well-established reputation for being the type of person that put the “go” in “go getter.” As a student at Cedar Falls High School, she won the state swimming meet all four years, eventually putting up record times that would stand for decades. She attended the Tippie College of Business at the University of Iowa and earned a degree in Economics. After graduating, she began trading commodities with American Express Financial in Des Moines.

Enjoyable as it was, within a couple of years of graduation, her black and gold blood was looking for a road back to Iowa City and the Hawks.

Tiffany met Matt through an industry event and as his dream for opening an eastern Iowa office began to come to life, he knew that Tiffany was the perfect person for the job.

“The sales goal for the first season was $150,000,” said Tiffany. “I made a list of my top 50 targets and I hit the pavement. I didn’t have a company car. I didn’t have any marketing materials. All I had was a sales goal and t-shirt that said Perficut.”

“Nobody even knew who we were at the time,” she added with a laugh. Unable to get prospects to return her calls, Tiffany began voluntarily performing monthly site reviews. She would take photos of each prospect’s campus and then email the photos with notes to the property manager. “I would do anything that I could think of to get someone’s attention,” she said. “When I wasn’t doing site reviews, I was making cold calls and trying to write marketing materials with MS Word. It was 110% guerrilla tactics.”

Getting Our Hands Dirty

Before long, the hard work began to pay off and the contracts started to trickle in. Within the first few months, Tiffany had exceeded $250,000 in sales.

“Now that we had sold it, we had to figure out how to get the work done!” she laughed.

“We have extremely high standards for customer service and communication,” she said.

“Our strategy had always been to grow slowly and methodically so that we didn’t get over-committed. But by the beginning of year two, we had some very large contracts and couldn’t find any labor.”

“During that spring, I had an order of 2,000 plantings show up and no one to plant them. So I rolled up my sleeves, and got to work.”

“A few days later, Matt and Kory heard about what was going on and they came over to help. Our clients kept driving by our sites but they never realized that sales was planting the flowers and the owners were cutting the grass!”

“Matt and Kory hadn’t been behind a mower in 15 years, but there they were in their Raybans and cowboy boots, making sure that the job got done to their standards. It truly was a team effort. We had so much fun doing it, for the rest of that season the guys would come over to mow about once a week, while I would run around and pull weeds.”

With the success of Tiffany’s sales effort, Matt and Kory began looking for a production manager who could manage the quickly growing crews in what was becoming an increasingly difficult labor market.

“We knew we needed someone with a lot of creativity, a strong sense of teamwork and the ability to pull off challenging tasks,” said Kory.

“Someone that could help us keep climbing,” he added. “Figuratively or literally, as it turned out!”

Ryan Nurnberg was a carpenter in Des Moines, who credits his passion for rock climbing as providing him with the skills he needed to succeed in business.

“I guess it would seem strange that I got so interested in rock climbing, because I’m actually afraid of heights,” Ryan said.

“But there you are, pushing yourself to do something when your mind is saying ‘no’ but your heart is saying ‘yes.’”

“I think that feeling drew me to a lot of things in life. If there was something that I wanted to achieve in life, I would find myself thinking, ‘somebody here is going to do it. If it’s not me, it’s going to be somebody else.’”

“So I learned to dig a little deeper and push above and beyond.”

“The great thing about climbing is that you have to have commitment. You can’t say, ‘do this’ or ‘do that.’ You have to say, ‘this is my goal’ and you have to know that you only have one chance to do it right.”

Then, in a twist that could only happen in a place like Iowa, Ryan got a phone call.

“One day, a guy calls me on the phone and asks, ‘How would you like to climb trees for a living?’”

The next week, Ryan found himself as the newest member of Perficut’s tree team. Then in a couple of short years, Ryan quickly climbed the ranks through the tree crews to department manager, and then on to a role as production manager, overseeing maintenance and watering.

During a production meeting in 2014, Ryan learned that there was a vacancy in the eastern Iowa office.

“It was the same experience I had as a rock climber,” Ryan said. “My brain was saying ‘no’ but my heart was saying ‘yes.’ I knew that it would be another opportunity for me to push myself and continue to grow.”

In the two years since Ryan has been leading operations in Eastern Iowa, the production team has doubled in size and tripled its fleet.

“It’s an extremely challenging market,” Ryan said. “There is very low unemployment and all the top companies are struggling to find good workers.”

“You have to be determined and be willing to put a lot of creativity into your hiring strategies,” he added.

“Once you have your teams in place, you have to keep moral up and make sure your people like their work. We work extremely hard, but try to make it fun. It’s a careful ballet.”

With annual sales growth showing no signs of tapering off, Tiffany and Ryan continue to push higher.